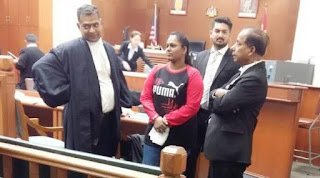 However, about 1 year after she was charged, the Prosecution suddenly brought in 2 depositions as evidence pursuant to Section 61A of the Act. This allows deposition to be taken with or without the presence of the accused and it is prima facie evidence.

This is totally unfair and unconstitutional as it deprives Vigneswary of her right to a fair trial as she will not be accorded to opportunity to cross-examine the person who allegedly did the ‘deposition’. To make things worse, we were already lawyers on record but yet the prosecution did not notify us about the deposition taking place.

a. Is Section 61A of the Anti-Trafficking In Persons & Anti-Smuggling of Migrants Act 2007 contravening the Federal Constitution; and

b. Is the right to cross-examine a witness in a criminal trial a fundamental right of every citizen of Malaysia; and

c. Does Parliament have powers to make laws like Section 61A of the Anti-Trafficking in Persons & Anti-Smuggling of Migrants Act 2007 which usurps the power of the Judiciary

During the hearing on 16.06.2017, M. Kula Segaran the counsel for Vigneswary argued inter alia that the prejudicial effect of Section 61A outweighs the probative value of the evidence and that it was contrary to Article 8 of the Federal Constitution.

Even for more brutal offences like murder and rape, the accused are entitled to cross-examine the witnesses wherelse in this case the accused isn’t allowed, a clear breach of natural justice. M. Kula Segaran also in detail ventilated the Semenyih Jaya case, and that Judges should jealously guard the judicial powers of the Court.

He further went on and argued that per Article 121 of the Federal Constitution, our judicial powers can’t be taken away or controlled with. We have a written constitution and thus our country is that of a constitutional supremacy unlike the United Kingdom wherein they practice parliamentary supremacy.

It is now upon the Judges to trigger the inner conscience of the Courts which Parliament has to abide. The right to cross-examine is a vested inalienable right to an accused.

The Prosecution led by Tuan Mohamad Abazafree bin Mohd Abbas, argued that cross-examination is a criminal procedure created by Parliament, and is a specific provision. He argues that the weight of the deposition is still to be determined by the presiding Judge. He further went on to say that it is a only a process and has nothing to do with the separation of powers.

Section 61A of the Anti-Trafficking In Persons & Smuggling Of Migrants Act 2007.
is unfair, unreasonable, oppressive and prejudicial and should be truck down 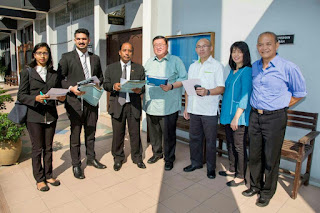 
Member of Parliament challenge the constitutionality of Section 9(1) of Peaceful Assembly Act 2012
On 14.10.2016, Thomas Su the MP for Ipoh Timur was charged under Section 9(1) and punishable under Section 9(5) of Peaceful Assembly Act 2012. The maximum fine under this section is RM10,000. If found guilty and fined more than RM two Thousand (2000.00) he will be disqualified as a Member of Parliament.

After perusing the charge, the Peaceful Assembly Act 2012 and our Federal Constitution we are of the opinion that particularly Section 9(1) and Section 9(5) of the Peaceful Assembly Act 2012 is unconstitutional. Thus, we have filed an application pursuant to Section 30 of the Courts of Judicature Act 1964 to refer the constitutionality of this section to the High Court and subsequently to the Federal Court pursuant to Section 84 Courts of Judicature Act 1964.

Our Government has also pledged to the United Nation Human Rights Council that our Government believe is strongly in upholding freedom of assembly but in reality, they do not adhere with it.

The case was adjourned to allow the AG to file the necessary affidavit in reply before the case is fixed for Hearing proper.

The lawyers whom assisted in this case today were M. Kula Segaran, N. Selvam, Miss P.Kala Malar and A. Vemal.


Housemanship training issue: Jayaindran should withdraw his claim or prove with facts that
local medical graduates only have to wait an average of 3 months for posting
The oversupply of doctors and the long wait for housemanship training have been two problems that have been raised for sometime. However, the Health Ministry has not been able to come out with effective short term and long term solution to resolve these problems.

A few days ago, in response to concerns raised by Malaysian Medical Association on the plight of fresh medical graduates who have to wait long to get posting for housemanship, Deputy Health director-general Datuk Dr S. Jeyaindran said that the Health Ministry can absorb up to 5,300 new housemen every year for its facilities nationwide and therefore, the situation is “manageable”.

“Some 4,300 doctors graduate from local medical schools while the rest are from abroad. The situation is not that bad and we still have places for them,” he said.

However, Dr Jayaindran’s claim has been rebuked by at least two medical graduates.

According to a Free Malaysia Today report dated June 1, a fresh graduate has said that she had to wait 11 months for her posting.

“These are all facts,” she said. “Half of each university’s graduates are still waiting for a job offer.”

In a letter to the Editor in the Star today, a medical graduate from subang jaya who wrote using the name disgruntled medical grad has also disputed Jayaindran’s claim that medical graduates of local universities only need to wait an average of three months for their housemanship training.

This graduate described the claim made by Deputy Health director-general Datuk Dr S. Jeyaindran rather far-fetched, to say the least.

His/her letter said “A few friends of mine who graduated in October 2016 from Universiti Malaya, the top public university in the country, began their housemanship just last week”.

So how did Jayaindran make the claim that local graduates only need to wait an average of three months when the fact is not so?

How could we expect the Health Ministry to resolve this serious problem faced by the medical graduates when even the deputy director general could be so wrong in his claim?

Jayaindran should withdraw his claim or prove with facts that local medical graduates only have to wait an average of three months for their housemanship posting.

Why do we have a situation of over supply of doctors? Who will accept responsibility that we just should not have allowed the mushrooming of medical colleges?

I warned in my speech in Parliament some 10 years ago that if uncontrolled in the approving of new medical colleges and the ensuing production of doctors a situation of over supply will happen.

The Health Ministry said I was out of tune and we need many more doctors. Statistics were thrown to us to show how shallow and wrong our arguments were.

But now we are are in a "loose loose" situation. Will the oversupply be addressed? Has the Government the will power to address this issue?