#JusticeForGanapathy : The Government owes Malayians an apology for the death of Ganapathy 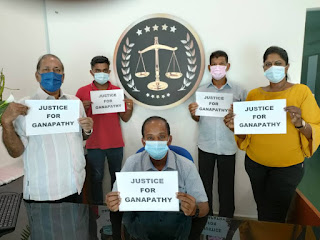 The government of Malaysia owes its people an unconditional apology after yet another alleged custodial death.
A Ganapathy, a cow milk trader, died while in police custody. His lawyer has since stated that the death was a result of injuries on his legs and shoulders, while his mother says he was healthy when he was arrested. The mother, in her police report, claimed that her son had been beaten during his time in custody, which resulted in the amputation of his leg.
On April 18 Ganapathy died at Selayang Hospital, just over a month after he was first warded. He leaves behind two children aged five and seven.
It has been reported (http://bitly.ws/d3np) that Malaysians have been in an uproar over his death, claiming once again that police brutality led to another innocent man dead while in custody. They also pointed out how ethnic Indians are disproportionately found dead in police custody.
They have a right to be angry as this is not the first case of this nature and our calls for the setting up of the Independent Police Complaints and Misconduct Commission (IPCMC) has been ignored. The commission will act against negligence and irresponsibility in the force.
A man gets arrested, goes into lockup and returns to his family, dead. In a democratic country like our, this is utterly unacceptable.
If the government can enact laws under the emergency, then they can also set up the IPCMC under the emergency.

Recently, the PN government evoked the Emergency (National Trust Fund) (Amendment) Ordinance 2021 to make the amendment that allows them to utilise the National Trust Fund (KWAN) for the procurement of Covid-19 vaccines.
How many Malaysians need to die before the government realises the absolute need for the IPCMC? The PN government should do all it can to ensure this does not happen again.
Datuk Seri Acryl Sani Abdullah Sani, who will be our new Inspector-General of Police on May 4, can do the right thing by immediately ordering for an independent probe or court inquiry to take place. That would set  Acryl Sani on the right path.
Action against the culprits must be taken. Every life, no matter of what race, is important, it is high time that the government and the police recognise this fact.
What happened to Ganapathy can happen to any of us.
M. Kula Segaran

Reducing Inequality in the Education System

One factor that contributes to education inequality in Malaysia comes from the socio-economic gap of students, whether they come from rural or urban settings. Often, disadvantaged students lag because of their parents’ inability to offer them the extra tuition or to pay for them to continue with their tertiary education. The reason why many students need extra tuition is that the system of education is exam and result-oriented and is based on memorization rather than on an analysis-based system which would encourage critical thinking and leadership. Some students often enrol to do courses at public tertiary institutions that they are not interested in, leading to high drop-out rates for this particular group.  In general, the education system in Malaysia tends to class students according to their grades. This marginalization of students with lower academic credentials could be the major contributor to the inequality in the education system. A good education

The Seizure of Top Glove Products Could Have Been Prevented, More Sanctions Likely

I refer to the report that the US Customs and Border Protection (CBP) have directed personnel at all US ports of entry to begin seizing disposable gloves produced by Top Glove Corporation Bhd. I want to stress that although it is unfortunate that the biggest glove producer in the world has been sanctioned, it did not come without warning. The possibility of more countries applying the same sanctions similar to that of the US Customs and Border Protection (US CBP) is likely.  Worse still, if left unresolved, it could spread to other companies and later other industries.  The real let down here is the Home Ministry.  During my tenure as Human Resources Minister, I initiated a special independent committee on foreign worker management led by former Court of Appeal judge Hishammudin Yunus. This committee had produced a report comprising 40 recommendations which I then presented to the Cabinet for discussion. I promised the people that after that this report will be made public. After prese

The wise men often reckon to prepare for the future, and with the pace new technologies have popped up and changed industries in recent years, the profundity of the aforementioned advice seems even more vivid. Futuristic quantum computers and the age of robots aren’t only constrained to sci-fi movies, they’re our reality now. You might have noticed how the nature of jobs has changed around you and it’s safe to say that an awful lot of skills and jobs would become obsolete in the coming years. So, just to make sure these new changes don’t look foreign to you and robots don’t give you a run for your money, here’s a list of skills that you should be honing to make sure the arsenal of your skill set doesn’t look antiquated. “The illiterate of the 21st century will not be those who cannot read and write, but those who cannot learn, unlearn, and relearn.”- Alvin Toffler  Cognitive Flexibility:  As the name suggests, Cognitive Flexibility is how flexible your cogniti