Teacher Subbarau charged under official Secrets Act (OSA) was ordered by the Court of Appeal to enter his defence on 29.05.2017.

Subbarau was charged for 5 offences under the OSA in 2014. he was acquitted by the Sessions Court in 2015 and this decision was agreed to by the High Court Seremban in 2016. If convicted for each offence Subrrow can be sentenced to a maximum jail term of years thus for 5 charges it can accumulate to 35 years in total!!

Last Wednesday the COA gave the majority written grounds but the dissenting grounds are not out as yet. Thus yesterday an application was filed in the COA to Review the said decision which in normal cases will be heard by 5 COA Judges.

To our utter surprise the DPP objected to our application on the following grounds:


The decision by the COA is not final as the accused still has two avenues to appeal if found guilty.
This application was not done immediately with the COA on 29.05.2017.
That 'justice' for the prosecution must be done.


We replied and said the following issues overtakes the objections by the DPP.

We see no urgency in this trial as the review application out to take its course and president . If otherwise due and fair justice would not be done to the accused . We are puzzled as to the hurried manner the prosecution wants to proceed with the trial. It has to be noted there are 4 more teachers who have been charged under OSA where cases are pending at different levels in the courts. The DPP must only prosecute in the interest of justice and not merely to convict!! Let's not forget in criminal cases the paramount importance is justice and fair play and not forgetting the great saying by William Blackstone who stated "It is better that 10 guilty men escape than one innocent suffer."


ADUN Senawang YB Gunasegaran was in court too.

Parties who appeared for the accused are M. Kula Segaran,Miss Nicole Tan, and Vemal Arasan(pdk)

This case was presided by Sessions Court Judge Tuan Ramesh.

Sent from my iPad 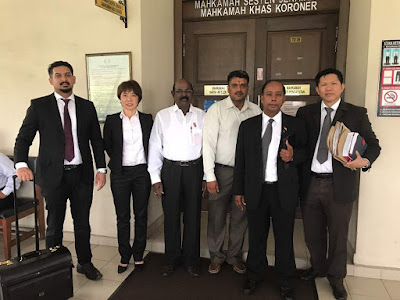 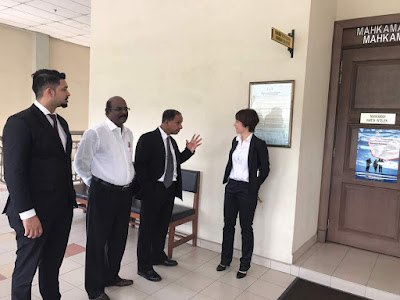