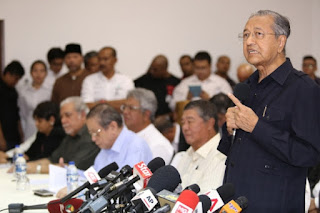 The Barisan Nasional Backbenchers Club (BNBBC) chief said history has shown that the coalition has survived senior leaders leaving, and that it was the nature of politics that personalities come and go

Shahrir said instead that it was those who backed Dr Mahathir’s Citizens’ Declaration that would be damaged, noting that the movement was already creating discord among opposition parties supporting it.

“Even DAP members are questioning on why is DAP is aligning itself with Tun Mahathir.

Dr Mahathir together with other Barisan Nasional veterans, opposition leaders and human rights activists, recently banded together in a “Save Malaysia” movement by signing a Citizens’ Declaration that called for Prime Minister Datuk Seri Najib Razak’s removal.
Posted by M. Kula Segaran at 8:30 PM