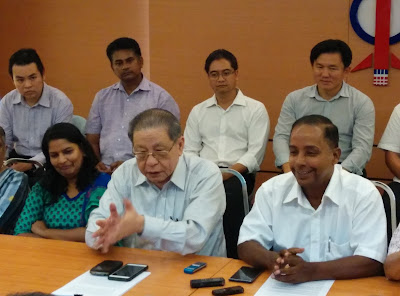 
Indira expressed her disappointment that this unilateral conversion seems not to end and there is no finality. She said she will fight the matter for Justice to the end


YB lim Kit Siang lambasted and said what type of laws we have that has prevented Indira from seeing her own child for the last 7 years. Says lack of political will and leadership by the PM has resulted in this matter to be dragged on. Further he has met YB Tengku Razaleh who has agreed to join the campaign for Indira. Further YB Lim says we now have to move on to proceed a peoples movement to bring change.


M/s Sumathi said tomorrows walk event at Polo Ground is necessary to enlighten people of the sufferings of a mother when a mother is separated from her own child for 7 years. The walks starts at 4.30pm and urged all to attend and participate. She urged participants to come in black as a sign of protests .


On 3rd March 2010 Justice Wan Afara of Ipoh High Court granted custody of all the 3 children of Indira Gandhi after hearing all parties. The husband's appeals to higher Civil courts were thrown out. But he however got a custody order from the Syariah court. Indira was named a party in the Syariah court although she is a non-muslim and where Syariah court has exclusive jurisdiction over Muslims only.
We have launched a nationwide “Solidarity with Indira Gandhi’ campaign and plan to visit and have dialogues exchange views with fellow Malaysians on the unilateral conversion issue. We are grateful for the support and concern many have expressed for Indira Gandhi.

The cabinet at its meeting yesterday agreed to present necessary amendments to settle the issues of unilateral conversion during the March Parliamentry session.

Way back in 2009, when I had raised this issue the Government not only formed a committee to look into this but also issued a directive that in cases when a single spouse converts to another religion the children of the family should be raised in the same religion as before the conversion. This being more a advice where no one adhered to it.

Subsequently 2 Cabinet committees were formed but there seems to be no solution to this unilateral conversion.

I welcome the assurance by de facto law Minister Nancy Shukri and Minister Subramaniam that in the coming March sitting of Parliament where necessary amendments would be tabled to address unilateral conversions. If only the Government had kept its promise to so introduce necessary amendments back in 2009 many like Indira Gandhi and their families would have not to suffer.

There are many families and young children who have been caught by the unilateral conversions dilemma and are suffering in silence. Many cannot take their case to court as its costly and will take years for an outcome if any, like in Indira Gandhi’s matter.

There are also cases where only upon death the family finds out that the deceased has converted to another religion. Like in the case of M. Moorthy who was a Hindu when he became a national hero as member of the first expedition to conquer Mount Everest. Syariah Court declared he had converted to Islam which was disputed by his wife. Subsequently he was buried in a Muslim cemetery. This form of incidence is called the “body snatching” case. This also causes much pain and suffering to the family and relations of the deceased. See http://news.bbc.co.uk/2/hi/asia-pacific/4563452.stm
https://en.wikipedia.org/wiki/M._Moorthy


I would suggest the Government to look into this “body snatching” cases and bring appropriate amendments to resolve the uncertainty and confusion upon the death of a person.

The Government should not address the above issues in a adhoc and a piece mail legislations.

A compressive and in-depth study should be done and in this respect the DAP is ready and willing to assist the Government to resolve this matter which has been dragging for more than 7 years.

Therefore it is time for us as Malaysians to help Indira Gandhi's and extend our moral support. We would most welcome those who wish to contribute financially towards a special fund being set up to extend any amount of financial aid to further ease Indira Gandhi's financial burden, education of her children and for legal expenses.

Indira Gandhi has been going through this struggle for the last six years trying to handle matters with what she can. She has also been in and out of Court over the years bearing so much of emotional trauma, pain and suffering.


Those who wish to contribute could kindly send your contributions to:-

It is hoped the necessary compressive amendment bills to address the above issues could be sent to all MP's as soon as possible for us to prepare and debate it fruitfully.