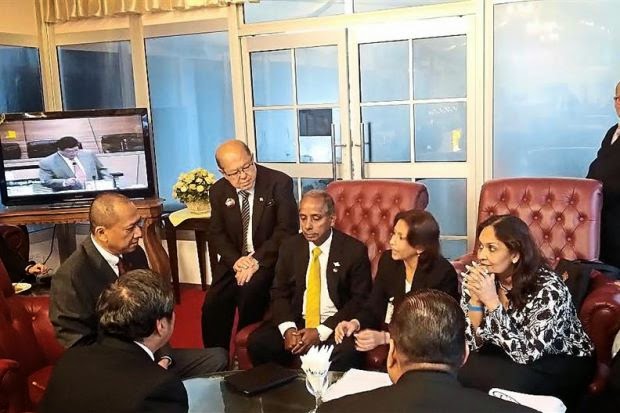 Those present at the meeting included myself, YB Fong Kui Lun (MP for Bukit Bintang) and YB Sim Tong Him  (MP for Kota Melaka ) and Heritage Department officials.


A memorandum objecting the development of VivekanandaAshram was presented to the Minister. (See attachment).

It is commendable that the group has put in a lot of efforts to come up with very articulate, valid and convincing arguments.


On Nov 17, Datuk Nazri had announced in Parliament his ministry’s decision to declare Vivekananda Ashram as a heritage site.


Dato Nazri assured he will do all within his powers to declare the Ashram as a National Heritage site. A welcome move by a bold Minister in view of stubbornness by the trustees to develop the area.


Historical and old buildings need to be preserved to showcase the communities and leaders connection and contributions to the past. Little India In KL has no meaning if this area is developed. The tranquility and serenity of the area will be erased forever and this place will become a "concrete jungle".  "Concrete Jungle" will  be disastrous to attract tourist to this area. The development is totally illogical , unreasonable and against the communities wishes.


It should also be clear to the Trustees of Vivekananda Ashram that the Indian community has also taken the stand and is determined that Vivekananda Ashram is a national heritage that cannot and should not be developed for commercial purposes.

As such, the best and prudent act for the trustees will be to announce publicly that the proposed development is cancelled.

Further dragging will only mean further embarrassment to the trustees.

It must be noted at the outset that The Vivekananda Ashrama does not have the power to develop or to sell the Land under its Memorandum & Articles of the Association. The proposed development is therefore in excess of power, ultra vires, and wrongful on several counts, including breach of trust.
The amendment to the objects of the Vivekananda Ashrama on 22nd July 2011, if valid, only empowers a sale of the Land with the prior approval of the Minister charged with the responsibilities for companies and the Director General of Inland Revenue, Malaysia. Such approvals do not appear to have been secured.

2.       Of particular importance are Articles 4 and 5 of the M&A which preserve the income and property of the Association to be applied solely for the promotion of its objects, without any portion being return to its members in profits or dividends, as a condition of its incorporation as a company limited by Guarantee.

5.       The Vivekananda Ashrama Building (“the Building”) is constructed on land identified as Lot 33, Seksyen 72 GRN 50406 (“the Land”). GRN 50406 appears to have been issued in 1895, conditional upon a building worth $500 being erected thereon within a year, on pain of withdrawal of the grant. The grant of the Land to the VA Association is therefore, conditional on a building being erected within a defined period for the purposes of the VA Association. This condition runs with the Land.

7.       The VA Association in essence holds the Land in trust for the benefit of its public purpose, and the community for which the M&A designs it to serve.
8.       Any change in use of the Land for purposes other than its public and charitable purpose would be ultra vires the M&A; and contrary to the terms of incorporation and the condition imposed upon the Land.

9.       Any measures or steps taken that enable a member to receive returns from the change in use of the Land would be void, contrary to the law, and in excess of the powers of the Management Committee of the VA Association.

11.     It was publicly announced by the Chairman of the VA Association in or around 16 October 2014 that the Land was to be sold to and/or developed by a company called F3 Capital Sdn Bhd (“F3 Capital”) for the purposes of building a 23 storey residential building with an eight storey parking podium behind and over the Building on the Land (“the Proposed Development”). The results of a company search on F3 Capital identify Vignesh Naidu as a director and shareholder thereof. The result of a search on F3 Capital at the CCM is attached as Attachment 7.

·                 Attachment 7A is the Financial Statement of the VA Association for the year ending 2013 which shows the RM6 million in funds received from the Government to fund its schools.

C.       The Heritage Status of the Building and Land
12.     The heritage status of the Building and Land as a site of historical, cultural and social value and significance began in 1895, with the grant of the Land for use by the VA Association for its specific public objectives; enhanced by the esteemed activities of the VA Association that were held in the years leading to the independence of this nation on the Land and in the Building. Many charitable, cultural and social causes that cumulatively contribute to substantive nation building were pioneered here. The Land and Building nurtured many highly regarded persons and organizations in Malaysia, and is a testimony of true patriotism.

13.     In 2008 and 2009, two “Notices of Intention to Designate Site as Heritage Site” were issued by the Commissioner of Heritage, pursuant to Section 27(2)(a) of the National Heritage Act 2005 in recognition of this heritage value. It is commonly understood that the Trustees/Directors of the VA Association as Owners of the Land, objected to this designation.
·                 Attachment 8 are the Notices appearing in the Gazette.

14.     The Commissioner of Heritage, pursuant to Section 31 of the National Heritage Act, 2005 is empowered, despite objection of the Owners/Trustees, to designate the Land and Building as a heritage site in the greater interest of the public and nation, with the consent of the State Authority.

16.     The Owners/Trustees of that site shall be notified at least 30 days prior to the date of the proposed declaration, under Section 67(4). Unlike Sections 24 to 31 of the Heritage Act, 2005 there is no further provision for hearing objections from the Owners or Trustees at this stage. A copy of the Minister’s Order shall be served on the Trustees of the site, and any person who objects to the declaration may submit an objection in writing to the Minister within 3 months of its publication, and apply to the Minister for the revocation of the Order. The Minister may, having been advised by the Heritage Council, revoke or refuse to revoke the Order and such decision shall be final. [Sections 67(7), (8) and (9)]. It would then be for the Owners/Trustees, if they deem fit, to seek Court redress against Minister’s decision.
17.     Any person may nominate to the Minister for any natural and intangible cultural heritage to be declared a National Heritage. As at 25th November 2014, more than 73,000 people in Malaysia of all races and religion have nominated that the Minister declare the Building and Land as a National Heritage.

19.     The Owners/Trustees have been heard with regard to the intention of the Commissioner of Heritage to declare the Land and Building as a heritage site. What remains outstanding is an affirmative declaration under Section 31 by the Commissioner of Heritage of the Building and Land as a heritage site. Section 67 can immediately thereafter be implemented by the Minister to declare the Building and Land as a National Heritage.

20.     The Building and Land will continue to remain owned by the VA Association pursuant to Section 69 the Heritage Act, 2005 regardless of its declaration as a National Heritage. There is no question of the Government having to compensate the Owners/Trustees when making such declaration.

22.     Section 9 of the Government Proceedings Act, 1956 enables new trustees to be appointed in the face of  alleged breach of  trust for the public, social or charitable purposes or where deemed necessary for the administration of such trust. Names of eminently suitable persons to replace the Trustees, should the need arise, can readily be furnished to the Minister.