A car is a necessity, My Bung!

A car is a necessity, My Bung! 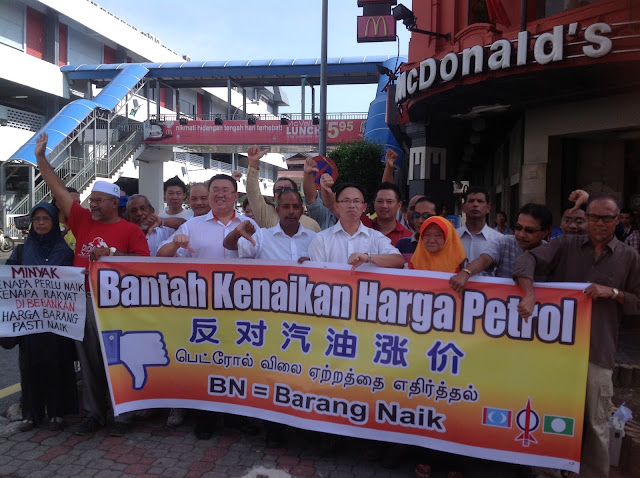 More voters voted for PR than BN in the last election. This means more people supported PR's policy of immediate decrease in fuel price upon taking federal power as promised by Annuar Ibrahim.

Unfortunately, due to the unfair constituency delineation and weightage practice, PR won more seats but BN won the government and so gone was the chance for Malaysians to enjoy lower fuel price.

BN has always been described as Barang Naik, so it is just a matter of time that the spend, spend, spend government would announce fuel increase as the Prime Minister did two days ago.

Many netizens have sarcastically described Najib’s announcement as BN’s Merdeka gift to the people or as reward to those who had supported BN in the last general election.

Though I have said that it was just a matter of time that BN government would announce the fuel increase,Najib’s announcement still came as quite a surprise to me and many people.

In fact, when news circulated that there would be an increase of RON 95 fuel price, many had dismissed the news and said that fuel increase would only affect RON 97 which is used by big cars.

Many could not believe the increase would involve RON 95, which is used by small cars.
I was surprised too by the timing and quantum of the increase.

Logically, aPrime Minister who is facing Umno election soon will at least postpone the increase announcement as this is after all not a measure that will gain him more votes. On the contrary, he may just lose some popularity.

The quantum of increase is also too steep and is bound to have chain effect which will burden the people.

So the big question is why has Najib introduced the untimely steep increase at the risk of losing some support among Umno members?

Why the austerity drive now?    Will there be more new taxes?

Electricity  tariffs and Goods and Services Tax next?

Najib should tell the public the true reasons for the steep increase at this time and the real situation of our economic health.

Is the nation going to face more woes? What are the subsidy rationalization plans for the next 5 years?

Kinabatangan MP Bung Mokhtar has been most insensitive when he tweeted 2 days ago the following:-

“Petrol prices have gone up, but it surely would not burden the rakyat as the only people with big cars are prominent figures who can afford it. Kampung people don’t have car”.

I shall not add more to the amount of criticisms which have been leveled at him by the public except to quote the following remarks made by a Tweeter ayeemin who scathingly said: “A car is not only for the rich. Today, it is a necessity. But having two wives is only for the rich.”