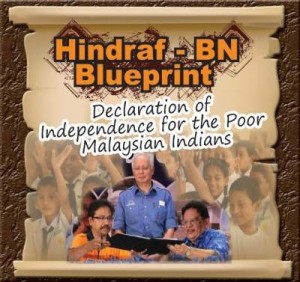 On 1 August 2013, P Waythamoorthy, representing Hindraf,  released a statement declaring that he would resign from the Barisan Nasional (BN) government, should his current portfolio as a Deputy Minister in the Prime Minister’s Department and as a Senator prove to be futile, being “unable to contribute to solving the problems of the Indian community in Malaysia”.

The press quoted him as stating, “The Prime Minister (Najib Abdul Razak) has appointed me primarily to oversee the often forgotten, longstanding, thorny issues affecting the Malaysian Indian community and to resolve them permanently, in line with his Economic Transformation Programme. Similarly without fear and favour, we stepped into Putrajaya with the genuine and sincere intention to take concrete corrective action.”

At face value, one should congratulate and acknowledge Waythamoorthy for being clear and distinct of his position and purpose of being in the Cabinet. His alliance with the BN government became official on 18 April 2013, when Waythamoorthy, as Chief of Hindraf, signed a Memorandum of Understanding (MoU) with BN. That was sixteen days before the General Election on 5 May 2013. Thereupon, Waythamoorthy pledged Hindraf’s full support for the BN party and urged all other Indians to return  BN with a two third majority in Parliament.

This chain of events was unanticipated and almost deviant, considering Hindraf’s previous political stand. Hindraf, being the acronym for Hindu Rights Action Force, became first politically acclaimed when it mobilized a historic rally of nearly 30,000 people on 25 November 2007 (some claimed the uprising across the country could exceed 100,000 people). Steered with the sole purpose of venting the built-up frustrations of all rank and files over prolonged period of neglect, their presence was an indication of the sustained marginalization and oppression under positive and discriminatory policies that favoured Bumiputras i.e. ethnic Malays. The timely defiance of the Government’s high-handedness by the docile minority Indians, who had been the solid vote bank for BN until year 2008, rendered this juncture, archival. 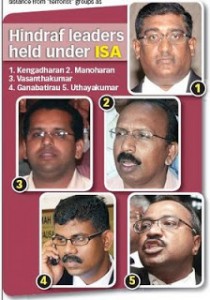 However, during this pivotal rally, Waythamoorthy was nowhere present as he was in the police lockup owing to the previous day’s arrests of himself and two others. While his brother, P Uthayakumar and V Ganabatirau had posted bail, Waythamoorthy refused to follow suit as a sign of protest. Thereafter, Waythamoorthy left Malaysia on 26 November 2007 to avoid being detained under the Internal Security Act (ISA). Eventually, on 13 December 2007, five Hindraf leaders were detained under the ISA. Waythamoorthy had escaped the incarceration unlike the others, who had spent 512 days in the Kamunting Detention Centre.

These arrests registered within many Indians a strong sense of rebellion against selective prosecution, racism and triggered a wave for change. Cohesively, Hindraf followers and the general public crystallized a nation-wide campaign against the ISA arrests, demanding the release of the detainees. Even then, Waythamoorthy was still nowhere to be seen in this struggle. However, he assumed the leadership role of Hindraf in exile and advanced to interpret the State’s actions as a form of double-standard application of the ‘equality provisions’ of the Federal Constitution.

Subsequently, Waythamoorthy continued further a bizarre case of claim of compensation against the British Government which ran into trillions, in view of the ‘historical debt’ owed by the colonial masters to the Indian Malaysians for their exploitation of Indian labour and failure to safeguard their equality rights after granting Independence. This case was purportedly filed prior to the Hindraf rally. 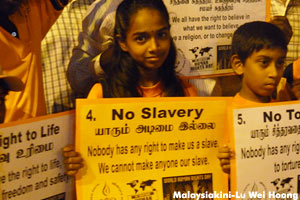 He carried out a campaign in exile, propagating that institutionalized racism is the root cause for the marginalization and dehumanization of the Indian Malaysians. His extensive arguments highlighted the absence of equality under the Federal Constitution for the minority Indians on grounds that all government policies were race based, i.e. for the Malay race. This reveals that Waythamoorthy had an in-depth insight of the oppressed plight of Indians and had complete knowledge as to what needed to be done. His views were bold and clear, which if at all uttered in Malaysia would suffice for an arrest for sedition.

Consequentially, Waythamoorthy claimed that he was denied entry back into Malaysia as his passport was impounded. Following a sudden change of events, he was allowed to enter Malaysia without any hiccups on 1 August 2012. Once settled, he took the necessary means to legalize Hindraf. Succeeding this was the engineering of the Hindraf Blueprint for the minority.

With the ultimate intention of garnering attention, Waythamoorthy then went on a hunger strike for 21 days, starting from March 10 to 31, 2013. He explicitly stated that Hindraf would pledge its full support to whichever party which endorses their blueprint – be it the ruling BN or the opposition coalition of Pakatan Rakyat (PR). PR eventually did not endorse the blueprint on grounds that they had already provided for most of the demands in their election manifesto. Additionally, PR stated that they could not fulfill Hindraf’s prerequisites of the allocation of the number of Parliamentary and State constituencies for Hindraf to contest in the then upcoming GE 13 under the PR banner. Hindraf retaliated by condemning certain quarters for exposing this confidential discussions between Hindraf and PR.

It was then when BN stepped in, selectively agreeing to endorse only four of the six demands of Hindraf’s blueprint. Hindraf hurriedly signed the MoU with BN after which it out-rightly denied having ever asked PR for seat allocations in the GE13. To justify, they defended that the alliance with BN was a strategy to save the Indians from PR as PR was the worse alternative. A sum of RM 4.5 billion annually was to benefit the Indian community via the MoU inked by Hindraf and BN.

The unrestraint support Hindraf delivered to BN during the GE 13 campaign period saw the publishing of full-paged coloured advertisements in all Tamil dailies, urging the Indians to vote for BN. Those adverts contained various promises which were penned in the MoU. In their original demand, one such condition was that the government would set up a Ministry for Minority Affairs. However, post elections, Waythamoorthy was only given the position of a Deputy Minister in the Prime Minister’s Department. Thus far, Hindraf has yet to reveal the secret deal signed in the form of MoU with the BN government. 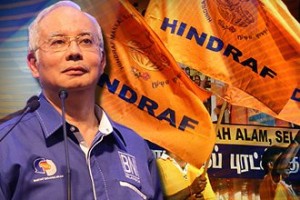 Waythamoorthy is a person who clearly understood how institutionalized racism has deeply rooted itself into the governmental machinery including the policy making and policy implementing institutions and also in the functioning of the Government led Corporations (GLCs) and private sectors. He inferred that the Indians were a dehumanized product from the colonial period and that that process extended into the post independent Malaysia, under UMNO’s government.

On the BN government’s side, the Malaysian Indian Congress (MIC) which represented the ethnic Indians was deemed a failure. The implementation of the National Economic Plan (NEP) which aimed to restructure society regardless of race, fused with the intention to eradicate poverty and restructure ethnic concentration in occupational sectors, did not benefit Indians, instead benefitting only the Bumiputeras. The Indians were completely out of the equation and at best, only a selected group of advantaged Indians from the middle class and upper middle class seized the opportunity of the quota system, which was extended at times to appease the non-Malays. Naturally, the economy grew and the country progressed, but the poor Indians became poorer.

Throughout this ongoing dilemma, MIC was ineffective and unavailing as they were limited only to the extent to which they could negotiate with the electorates to vote for BN. MIC’s intention to realize and advance the rights of the Indians was exhaustively compromised. Moreover, there was no radical leadership within the MIC to challenge the status quo, with much energy spent on infighting.

Over the fifty years, this inherent oppression induced the making of an Indian underclass, which lived in low cost flats, earning low wages; many were unskilled. Peaking social problems within this class lead to high suicide rates, high drop-out rates, gangsterism and higher proportion of remand prisoners and detainees under the Emergency Ordinance; emanating a self-consuming, destructive culture.

Nonetheless, Waythamoorthy and his advisers were fully aware of this state of oppression and that this was the making of the UMNO led government. The Indian issues have previously been advanced by many groups including professionals, through working papers, memorandums and also Cabinet papers. These are included in the National Economic Consultation Counsel (NECC) reports and Outline Perspective Plans and proposals submitted during the planning stages of the Malayisia  Plans.

This clearly depicts that the government knew precisely the wounds of the Indian community and the necessary interventions to treat them. The government never once lacked information to take charge of these issues, but only lacked the political will. Dismally, this political will was denied for decades which inevitably lead to the Indians’ uprising, culminating in the Hindraf rally in 2007. The frustrated, exasperated and dejected Indians mobilized to make one statement strictly clear: that, the BN government must go, MIC cannot deliver and BN government cannot reform itself. They knew that nothing else, except a complete change would help them. This was the most logical conclusion that anyone could infer. 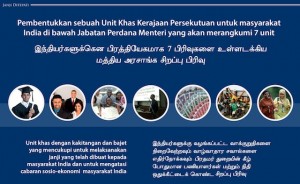 Having in mind all these information, one cannot but fail to fathom Waythamoorthy’s disastrous decision to join hands with the BN government and seek its help in an attempt to find a solution for the “often forgotten, longstanding, thorny issues affecting the Malaysian Indian community”. Being no different from MIC’s agenda, common sense could tell any person that a redress and reform of Indian issues by Hindraf is an utter impossibility. The reason is that UMNO, being a Malay nationalist and right-winged party, thrives on the Malay hegemony. Hence it will never yield equality ad idem. Being so potent and powerful, UMNO controls power itself, leaving no incentive for it to even consider negotiating with a person as powerless as Waythamoorthy.

It is regrettable that any benefit derived from the Najib administration is purely a token to please the people, where the root causes of their predicaments are camouflaged and the miseries of the people are glossed over. Indian leaders under UMNO’s rule would remain mere puppets, designed by BN to continue the agenda of Malay hegemony and Malay rights. Waythamoorthy is its latest addition to serve its cause.

Only a naïve person could make such a political blunder. But for Waythamoorthy, naivety is an impossibility. Thus one is often left wondering what motivated him or rather what was in it for him to join hands with a corrupt government.

Whether he resigns or not, is not the issue – the point is, if not naïve, why did he betray the Indians?