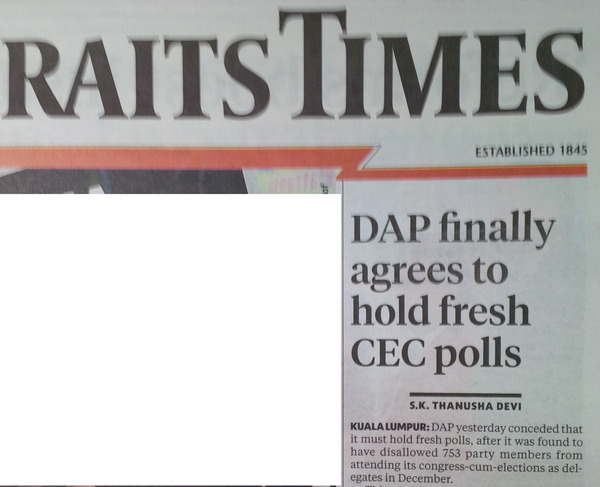 The New Straits Times (NST) front-page report today on the DAP Central Executive Committee (CEC) re-election is a typical example of the mountain of DDD – “Demonise/Destroy DAP” – lies and falsehoods by Umno/Barisan Nasional media, culminating in the July appearance of the booklet of lies by the fictitious “Father Augustus Chen”, in the past seven months.


“Kuala Lumpur: DAP yesterday conceded that it must hold fresh polls, after it was found to have disallowed 753 party members from attending its congress-cum-elections as delegates in December”.

This is not journalism but a downright blatant and bare-faced lie, for two reasons:


In fact there is no truth or basis whatsoever in the allegation as reported by the NST today that the Registrar of Societies (RoS) had in a letter on April 17, 2013, highlighted “753 DAP members claiming they were denied their right to attend the congress as delegates”, as

Firstly, there was no such denial of delegate right to attend the congress, as all the delegates were given the requisite notice under the party constitution; and

Secondly, it is a total fiction that 753 delegates complained to the RoS on this matter.
In fact, the party never received a single complaint from any delegate on being denied the right to attend the Congress, which was why the DAP repeatedly asked the RoS to furnish particulars of the complainants and their complaints but to no avail.

It is outrageous and even surreal that Hitler’s Propaganda Minister Goebbels’ doctrine that if a lie is repeated often enough it could become a fact has now living proof in UMNO/BN Malaysia with NST and Utusan Malaysia as the main exponents.

The two main allegations of the fictitious “Father Augustus Chen” for the invalidation of the CEC elections, namely “753 absent delegates (mostly Indians)” and the “547 phantom delegates (most from Penang)” are downright lies and falsehoods.

The NST front-page report today is proof that the DDD “Demolish-Destroy DAP” campaign through a mountain of lies and falsehoods by Umno/BN propagandists and cybertroopers in the Umno/BN media and the cyberspace is not going to let up with the DAP decision for CEC re-election.
On the contrary, the DDD propaganda war and the campaign of lies and falsehoods will be stepped up.

The NST front-page report of lies about DAP CEC re-election signals a new phase of the DDD propaganda war with lies and falsehoods.

DAP leaders and members as well as the Malaysian public must be aware that the DDD propaganda war will escalate and intensify in the coming days and weeks until the DAP CEC re-elections, hoping to achieve the objective to demonise, demolish and destroy the DAP!