Let me remind Chua that after he has become the MCA President, many Chinese still think that MCA is still the same “political eunuch” which cannot champion the rights and interest of the Chinese community.

Let me remind Chua that after he has become the MCA President, many Chinese still think that MCA is still the same “political eunuch” which cannot champion the rights and interest of the Chinese community.

A year ago, many people asked me when would be the next general election.
In recent weeks, the question many people have been asking me is this—why is the Prime Minister Dato Seri Najib so afraid of dissolving the Parliament?

My answer is this- it is obvious that Najib is not confident about BN’s electoral prospects in the next general election and so he is just unable to make up his mind when to dissolve the Parliament.

But Najib will have to decide soon any way as the term of current Parliament will end on April 27.

In the run up to next election, we can definitely expect announcement of political goodies and “ang pows’ by BN.

A supporter called me up today to say that Chua was quoted in a Chinese daily as saying that DAP will only strengthen PAS and DAP is “ Mai Hua 卖华” ( selling out the Chinese) and also “ Zheng Zhi Hang Jian政治汉奸” ( political traitor of the Chinese community).

When I heard this, my reply to the supporter is this – this is a real big joke just like when Sharifah said she forgives Bawani.

Sharifah the bully should be apologizing to Bawani and not talking about forgiving Bawani.

MCA has always sold out the people’s rights, yet Chua Soi Lek dares to accuse DAP of being “ mai hua”!

DAP records are for all to see and we are proud for standing up for Malaysians of all races since 1966.

I advise Chua not to  waste his time making baseless allegations against the DAP. 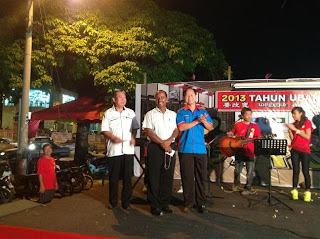 I want to question MCA leaders why they have been keeping quiet on Mahathir’s admission that citizenships were given out in Sabah and his comparing of giving out of citizenships by Tunku Abdul Rahman?

Everyone can see the difference between the granting of citizenships by Tunku Rahman to the Chinese and Indians and by Mahathir to foreigners in Sabah.

Tunku did not give any citizenship under the counter or to keep the then Alliance in power, so how could Mahathir smear the good name of Tunku?

Why has MCA chosen to remain silent on Mahathir’s remarks?

Let me remind Chua that after he has become the MCA President, many Chinese still think that MCA is still the same “political eunuch政治太监” ( Zheng Zhi Tai Jian ) which  cannot champion the rights and interest of the Chinese community.

Email ThisBlogThis!Share to TwitterShare to FacebookShare to Pinterest
Labels: speech