Najib the biggest loser from Bersih 3.0

Najib the biggest loser from Bersih 3.0

The Bersih 3.0 rally at Dataran Merdeka has thankfully passed without any major outbreaks of violence but there are recorded scenes which show how it could have so easily gone the other way.

A report by Aljazeera showed bloodied demonstrators and the unwarranted use of teargas and water cannons on sections of the crowd.

According to Harry Fawcett, the Aljazeera correspondent covering the event, the police were extremely heavy handed, kneeing and slapping some of the demonstrators who had broken through the barricades.
The police also busted the station’s television camera in an attempt to prevent their violent and unlawful acts from being filmed. The police also had the temerity to threaten and act harshly towards the reporters.

Forced to improvise by using Skype, Fawcett was still able to show ugly images of the country’s police and authorities which have been broadcast all over the world as well as uploaded on You Tube. 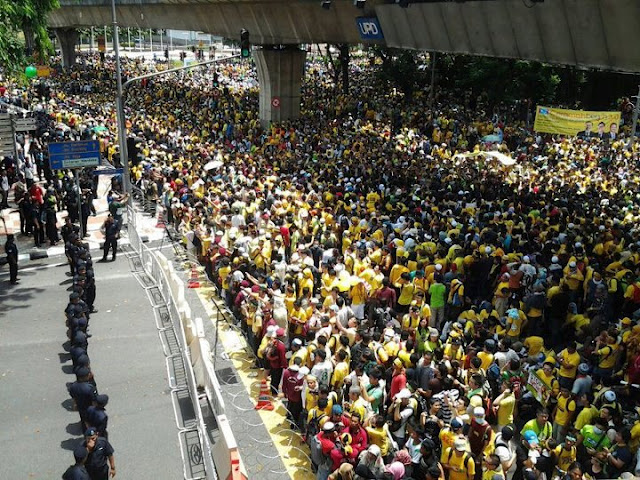 In an analysis of the aftermath, our respect and congratulations must go to the Bersih participants that congregated in Kuala Lumpur as well as in other major cities. The estimated 100,000 crowd were remarkably well behaved and acted with decorum and good sense.

It is a tribute to the political maturity of the enormous crowd converging on Dataran Merdeka from all over the country and of their commitment to peaceful political reform that they did not allow themselves to be provoked.

Despite all the official threats and coercion, despite the roadblocks placed to prevent them from reaching the venue of the rally, they still kept their cool. They showed the Barisan government and other Malaysians that they are made of sterner stuff and that they will not give in meekly to crude authoritarian intimidation.

Only one episode marred the conduct of the protesters. Footage from the police website shows a police car being overturned while a video clip on You Tube from a bystander showed the vehicle going out of control and hitting the kerb (see video).

There are conflicting accounts of this incident but you can expect the police to milk public sympathy based on this portrayal of protestor violence.

In the next few days, the government and Bersih as well as the opposition will claim success in achieving their objectives with regard to the outcome of the rally. The government will no doubt crow through the official mass media as to why they have won an important victory. 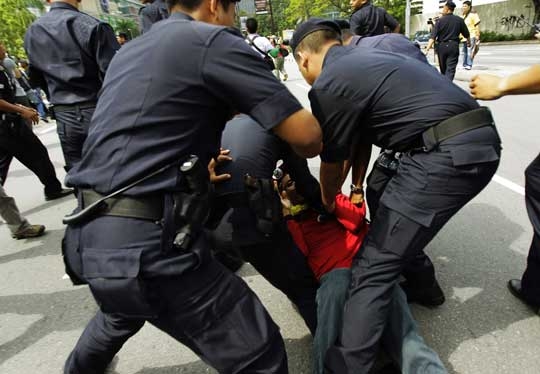 Already the police are claiming that it was the demonstrators who were responsible for the violence that took place although unofficial reports indicate that more than 60 demonstrators were beaten up.
The demonstrators have their side of the story. According to one of them in reference to the breaching of the barricades at Dataran Merdeka:


“Hello PDRM don’t come and give us this crap OK! You guys partially opened the barriers making us think that we could go in, and without warning you started your tear-gassing. Worse still you ordered all the [LRT] stations to close their shutters preventing us from getting back.”

Whichever way the story is spun it is clear that the biggest loser is Prime Minister Najib Razak.
Where was the prime minister when all of this was taking place? He was in Kuching. Did he not care about what was happening in Kuala Lumpur? Apparently not.

In fact, the Prime Minister was an invisible man not only on April 28 but also throughout the entire week of official posturing on the rejection of the Bersih venue in the run-up to the rally. Hiding behind the sarong of the city mayor, Ahmad Fuad, the prime minister was guilty of an official conspiracy to have the Dataran Merdeka designated as a security site to prevent Bersih from gathering there, and therefore heightening the official rhetoric to deny and intimidate the protestors.

An activist was quoted as saying on the eve of the rally:

“We appeal to the good sense and stewardship of the prime minister – as prime minister of the country, and not just of Barisan Nasional … the prime minister has the authority to overrule DBKL (Dewan Bandaraya Kuala Lumpur) and the police. All he has to do is make a phone call and allow Bersih to go on at Dataran Merdeka.”

That phone call not only did not materialize but the prime minister seems to have put his tail between his legs and headed out of the capital during a time of crisis.

What Najib should have done

Najib should not only have permitted the use of Dataran Merdeka but he should have facilitated his fellow Malaysians to attend the gathering there.

If he had any political acumen he should have instructed the various agencies of government to facilitate the rally by arranging for mobile toilets, Red Crescent assistance for the old and infirm (many thousands of elderly took part, some in wheel chairs!) and provided nasi bungkus (through his 1Malaysia Foundation) for the many poor who could ill afford to eat at the stalls.

He could have unclogged the roads and saved everyone the traffic mess caused by the police barring entry to the square.

He should have also offered to make a speech at the gathering – standing side by side with the Bersih and other rally leaders – to explain his agenda of democratic and electoral reform.

That way, he could have burnished his image in Malaysia and around the world as a reformist leader. He also would have scored political points which could have tilted the coming elections in his favour.

Instead he made a monumental political boo boo which is likely to seal his fate as the last Barisan Nasional prime minister of the country.
Posted by M. Kula Segaran at 3:11 PM

Email ThisBlogThis!Share to TwitterShare to FacebookShare to Pinterest
Labels: bersih